In the history of this planet, some souls have sought to follow the fiery path of Elijah, the spiritual victory of Jesus the Christ, the Middle Way of the Buddha, to integrate with the Real Self – the Christ Self. These are the great hearts that demonstrated a “way out” of the limited material world.

They are spiritual overcomers of a fiery intent; determined to find the Way to surmount the limitations of personality, psychology, social and religious provincialism, and the restrictive circumstances of time and space, and to unselfishly come back to be the showers of the way for mankind. These beings are the Saints, known in every culture and religion by many names – master, teacher, adept, guru, bodhisattva, genius, mahatma and friend. Some are unascended and some have become Ascended Masters. In many lifetimes, we have crossed the paths of these Masters.

El Morya is one of those great hearts that strove to unite and lead nations to spiritual oneness as King Arthur and again as Akbar the Great; felt the deep pains of betrayal as Thomas a Becket and defined character and integrity as Thomas More; and humorously chided the aristocracy of his day as the poet Thomas Moore. As Abraham, he was the great father presence to two entire nations – both the Jewish and Muslim faiths claim him as father.

In any lifetime where we have known him, the spirit of El Morya has inspired us with his nobility, his integrity, his untiring dedication to bring the goodwill and vision to mankind, and his ability to hold us to our higher potential – regardless of how nonsensically we are behaving. Now we can know his heart as the loving father who has a deep concern and love for our spiritual progress.

In the 1800s, this spiritual being embodied as the Rajput prince El Morya Khan. He retired to the mountain fastness of the Himalayas with his spiritual brothers Koot Hoomi Lal Singh (Kuthumi) and Djwal Khul, to pursue spiritual adeptship and not stop short of the spiritual victory spoken of by Jesus. Under the loving and disciplining gaze of his own Master, El Morya, as the Master M, along with Kuthumi, as the Master KH, sponsored the Theosophical Society. Their famous instructions are now on file with the British Museum in London.

These Mahatmas worked with Helena Petrovna Blavatsky to bring a reawakening in India to the spiritual roots of Hinduism and Buddhism and bring the Western mind to an appreciation of the ancient wisdom teachings which, by the late 19th century, were long forgotten by mankind. Through Theosophy, these Masters brought about the rebirth in India of its ancient history, language and national spirit. They also inspired the “Home Rule” movement that brought Gandhi back to India and the non-violent social movement that so incredibly won India her independence. At the close of the nineteenth century, El Morya ascended and is known today as the Ascended Master El Morya.

In the first half of the twentieth century, El Morya worked with Helena and Nicholas Roerich to found the Agni Yoga Society and dictated the Agni Yoga book series beginning with the spiritual classic and treasure, The Leaves of Morya’s Garden. These works were delivered to the world in Russian and English, in an effort to counteract the dark cloud of tyranny overtaking Europe from 1920 to 1948 and the force of World Communism shadowing the Motherland of Russia. Nicholas and Helena Roerich began the movement of Pax Cultura to protect world culture, art, architecture and music from the ravages of war. The mystical paintings of Roerich open our eyes to a world of beauty, meaning and mystery as they depict our Teachers, our spiritual heritage, our history and our future.

In the 1950s, El Morya trained Mark Prophet to be his amanuensis and dictated the Ashram Notes. For years these notes were sent freely to spiritual seekers in all walks of life in order to promote world peace and the Ashramic Consciousness. In 1958, El Morya sponsored Mark to start The Summit Lighthouse activity to shed the light of the Ascended Masters’ teachings to all mankind. There many of us found direct contact with the Master El Morya.

In 1975 El Morya dictated The Chela and The Path to introduce seekers to the spiritual quest to the path of initiation of the Great White Brotherhood. By kind permission of the Summit Lighthouse, we offer two chapters of his book. The first on El Morya’s retreat in Darjeeling and the spiritual lessons that are learned there. The second chapter is an introduction to Saint Germain and the Violet Flame. 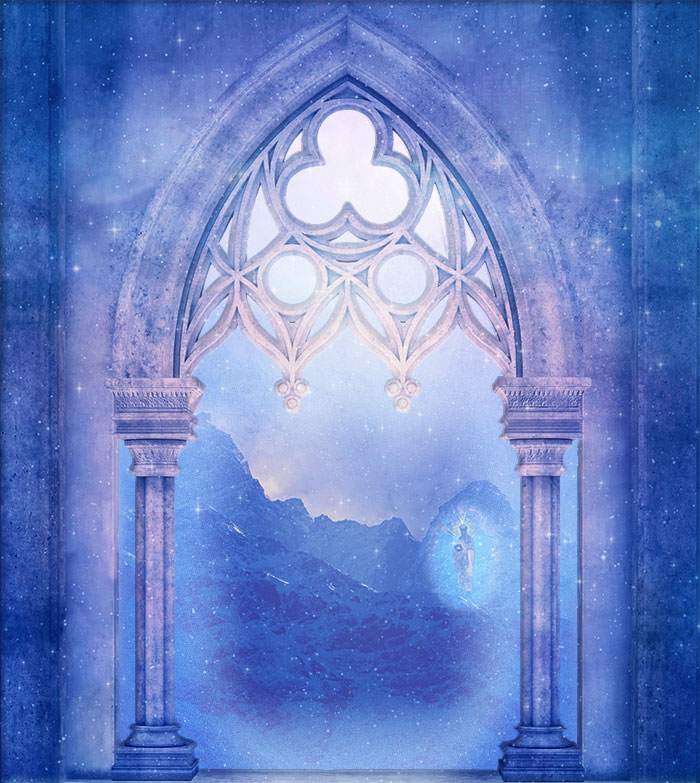 Think of the stars that give their light to humanity.
Be like those stars and give your love, wisdom and knowledge to others.
Only when everything is given can we receive.
In my Name do you work; do not forget that point.
Mind it particularly.
Wherever you go bring my light with you.
Of what use is an agent that hides himself behind impassable walls?
The Teacher is with you, and you must be in harmony with your followers.
Harmony, Harmony, Harmony.
Do not regret your path; forget the worldly pride and be open towards the New. Behold!

In the words of Elizabeth Clare Prophet about her teacher Morya, “I loved Him before I knew Him”. Master Morya is unforgettable. His spiritual imprint is a fire that lives.

His words give a fuller understanding of the Ashram and his love for his Chelas.